Andy Riley is a British comedy writer, who, along with his writing partner Kevin Cecil, has written for some hugely popular comedies, including Veep, Little Britain and Black Books. We grabbed him for a chat about working on his new Channel 4 series Year of the Rabbit.

Matt Berry stars as Detective Inspector Rabbit in Year of the Rabbit.

Whenever there’s an awards ceremony for TV or film, it’s always the faces of the actors who have won who end up on the ‘fun’ bit of the news later that night, and splashed across the papers the following day.

Never will you see the faces of the unsung heroes, the writers of these films and TV shows. Much of the time that’s a good thing, as many don’t get to see daylight often due to being locked in a dark room with a laptop, making them look and pale and withdrawn. Even when they do win, like British writer Andy Riley, and his writing partner Kevin Cecil, they won’t be made a fuss over.

Not that they care, they’re far too busy, like with their recent foray into the criminal world of Victorian London with their new Channel 4 comedy Year of the Rabbit, starring the unique talent that is Matt Berry.

Berry stars as Detective Inspector Rabbit, working in a crime-filled London, pushing the boundaries of what a copper should do on his particular beat to keep the streets safe. The pair were first approached to write the show by executive producer Ben Farrell. “He said to us ‘how about doing a Victorian version of The Sweeney with Matt Berry in it as a comedy?’ recalls Andy. “We were working on something else that day but immediately filled about three pages of a notebook with ideas. I always think that’s a good measure of whether or not you should get involved with a project, if you hit a gusher and it all comes splurging out then you’re on to a good one.”

Although the two writers were clearly excited by the project, the show wasn’t exactly a straightforward proposition. “On one level it’s a knockabout comedy,” explains Andy, “but it’s also a police procedural and it’s a historical piece, plus it’s also a conspiracy thriller. It’s quite a job to write Year of the Rabbit” he adds, thinking about it,” It’s technically demanding, let’s put it that way; to do all of that in about 24 minutes per episode.”

The source of the story was a fairly unusual one. The show’s star, in a previous life, worked at the popular tourist attraction The London Dungeons. “He used to play Jack the Ripper in the London tours there” reveals Andy. “. Matt enjoyed his time there, and it’s certainly stayed with him. He liked that swirling fog, murder stuff.”

On the surface, it feels like a very natural progression to perhaps use the likes of the works of Sir Arthur Conan Doyle, who created the one and only Sherlock Holmes after all, as a reference point. But that would have been too easy, and possibly too obvious. Instead, Andy and Kevin borrowed from more recent history. “For the tone, we reached more into the 1970’s; the character of Rabbit is like Shaft and Dirty Harry. He’s like Jack Regan,” says Andy, “ and we wrote the dialogue very much as if it was 1970’s cockney. His terminology is from that time. The other major characters talk very different to that. Mabel (played by Susan Wokoma) kind of talks how people talk now; Strauss (played by Freddie Fox) speaks how they spoke around 1943 – he’s like a character who stepped out of a Noel Coward film. When you have all your characters talking slightly differently it’s a lot of fun because each one has their own individual rhythms.”

Andy knows a thing or two about rhythm, certainly in a working capacity at least; he’s worked with Kevin for a considerable amount of time. “We started very young” he says, “and we’ve worked together now for over a quarter of a century! We knew each other from school, we’ve actually known each other from about the age of twelve. It’s not even that weird” he argues, “I’m not putting ourselves in the same bracket, but Galton and Simpson (legendary writers of their time, who wrote the classic BBC TV sitcom Steptoe & Son) met when they were teenagers in a sanatorium and then started writing for hospital radio together. We started doing comedy songs for bands in school, we wrote leaflets for our local voluntary organisation, and so you just carry on and don’t put that childish thing away and just keep going.” 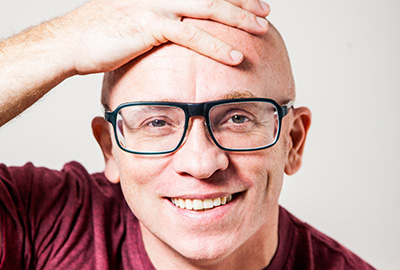 With over twenty five years of experience of writing together, they must by now be as close as a married couple, surely? “People often say it must be like a marriage ,” Andy counters, “ the only way it is, is in that you don’t have sex!”. But even if they didn’t put a professional ring on it, working as a team for so long must have its arguments. “Not anymore. I think maybe in the first ten years; if we really wanted to push each other’s buttons we could, but there’s no point. It’s a different category of relationship to all others. It’s not a friendship, it’s something else. It’s not a business partnership, it’s something else. It’s related to all of those, but it isn’t one of them. We’ve spent more hours talking than most marriages would have in a lifetime.”

And certainly working with someone else has its advantages. “We never get days where nothing comes out. Being in a writing partnership means that suffering from writer’s block, never really happens. We know how to kick each other into life on a Monday morning.”

Over the many, many years of working together, the duo have written for a number of popular shows, including Smack the Pony, Black Books and Little Britain. But one person in particular often calls them to help him out with his projects, Armando Iannucci, having written for him on The Friday Night Armistice and The Armando Iannucci Shows. Their most recent collaboration, Veep, ended up being quite rewarding, as they won a Primetime Emmy for their efforts. With filming in the US and attending the Emmys, it doesn’t get more glamorous than that. “There was a lot of flying back and forth between London and Baltimore where VEEP was shot.” Explains Andy, “We spent a lot of time on an industrial estate on the edge of Baltimore. The glamour of it all indeed.”

And although Andy describes the experience of attending the Emmys as “absolutely astonishing”, picking up an award hasn’t quite changed his life the way winning these big awards can. “It hasn’t changed that much; I’m still turning up at the same office, it’s not like you’re suddenly catapulted into some new realm, life carries on and most people don’t give a damn. I care about it, but i don’t think the world does greatly.”

He did allow himself one minor indulgence however. “Well, I changed my own Wikipedia page the very next day; you’re not supposed to mess with your own page but I thought, what the hell. Emmys changes lives if you’re an actor. Writers aren’t considered as glamorous as actors, we just carry on, and no-one really gives a damn who we are.”

So there might not be much acknowledgment on the red carpet for writers of their calibre, but it doesn’t mean that Andy hasn’t had other brushes with fame. There was a time in his life where he was embraced, albeit fairly briefly, by one European country in particular. As well as his writing work with Kevin, he’s also an established cartoonist, with a number of books published. “In my time, I’ve done a quite few cartoon books, one of them was a series about rabbits killing themselves. They sold a quite a bit in a few countries, including Britain, but only in Belgium could I become famous!” Not only did he feature in the highly revered Belgian magazine HUMO, which, according to Andy, “if you’re in HUMO you’ve kinda made it”, he also appeared on Belgium TV. “So I went on this chat show in Belgium; on the sofa I was sat next to a top Belgium cyclist and the former prime minister of Belgium. Those were the guests on the sofa. The next day I was at a book fair doing signings, and I as I was walking along, people were recognising me. I tell you, for one day, as a little holiday from normality, it felt absolutely great.”

Year of the Rabbit is now available on DVD & Digital.


For your chance to win a copy of the first series of Year of the Rabbit, enter here.