Don't mess with Vince Vaughn. Obviously it's sound advice to not mess with anyone (unless you're really, really sure you can take them, naturally), but if you were riled and stuck in a room with this particular Hollywood A-lister, we'd recommending doing a Frozen and 'Let it Go'.

It's not just the sheer physical size of the man - he looks like he could easily fill every inch of a door frame, in all directions - but he has a certain look behind the eyes that could probably ward off all kinds of evil if it came too close.

If you disagree then we present this film as evidence and put the case down for a rest. 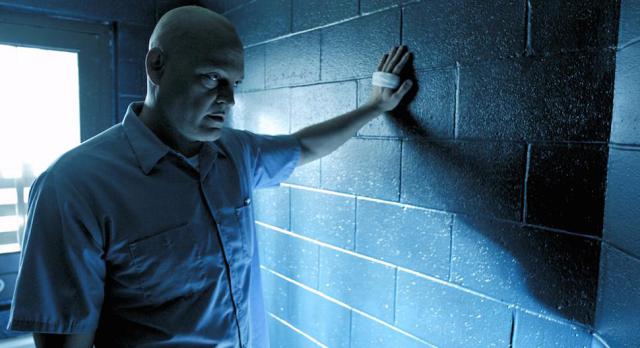 I'm going to destroy whomever washed this wall down with superglue.

Bradley Thomas (Vaughn) is having one hell of a bad day; not only does he get canned from his job at a garage, but when he gets home earlier than usual, he discovers his girlfriend Lauren (Jennifer Carpenter) has been cheating on him. With all this going on, Bradley realises that he may have to make some unpopular decisions to turn his life around.

Eighteen months later and things look like they've worked out. Not only is he still with Lauren, she's now pregnant and the pair are living in a pretty fab house. The cost of this change came by means of Bradley working for a drug dealer friend of his, as a runner.

When his boss asks him to take part in a deal, with two other guys he doesn't know, Bradley says no, but his boss manages to change his mind. When the deal goes royally pear-shaped, Bradley soon finds himself in jail, and just when you think things can't get any worse, they take a serious turn in the wrong direction.

I know you don't beleive me but I really do have eyes in the back of my head!

With a title that that has echoes of a dodgy eighties action flick that could only be seen on pirate video, this film is definitely for adults only. Yes it has a fair amount of violence, but it should be applauded, if for nothing else, for offering an adult audience adult content aimed squarely at them, that doesn't involve any Lycra or super powers.

Much like his debut Bone Tomahawk, director S. Craig Zahler has not only continued his theme of making films for a mature audience, but has once again done so at his own pace. At times the film feels on the wrong side of slow-burner, particularly as it takes the main protagonist almost half the film before he actually finds himself behind bars. Thankfully though, Vaughn's performance is such a compelling element of the film, that he leads the audience through all of the quieter moments, making them that little bit more bearable.

Which is just as well as the story teeters on the edge of absurdity on a number of occasions; Vaughn's character morphs into a Terminator/Rambo character that will stop at nothing, despite being in highly secure prisons, including one, run by Don Johnson's warden, who not only runs his prison like a Bond villain, but does so in a something akin to a Bond villain's secret lair.

Although it's pacing may be a little off for some, Zahler's style - visually muted, with a grey wash to proceedings, as if colour saw Vaughn in costume, peed its pants and went running off over the hills - is curiously appealing.

It's Vaughn's brutal performance you'll remember most though, with a restrained force that gathers violent momentum towards a gloriously vicious finale, with both Vaughn and Zahler proving that they can both throw a decent punch.