If ever there were a casting announcement to make a nerd’s mind melt to mush, it would be this one; not only does it star Tom Holland, the most recent incarnation of Spider-Man, but it also features Daisy Ridley, who played Rey in the most recent Star Wars trilogy.

Add to the mix the director of action hits The Bourne Identity and Edge of Tomorrow Doug Liman, and it sounds like a dream team too good to be true. Which of course, sadly, it is. 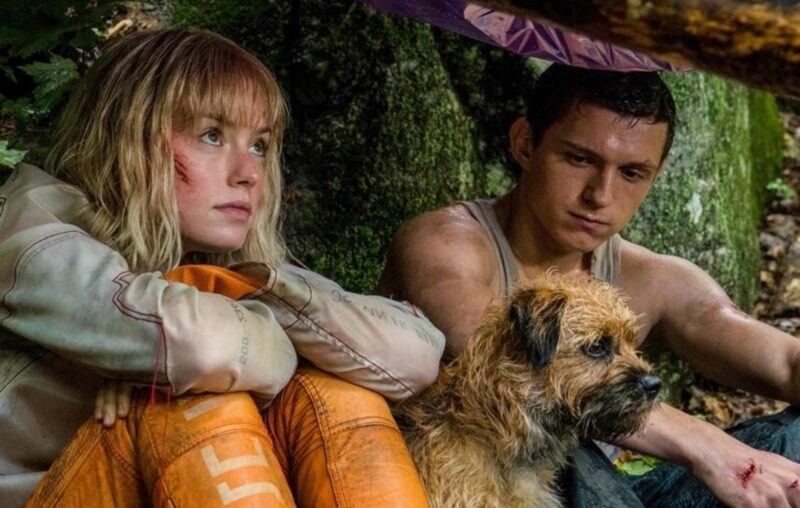 He thought it was close enough to glamping as you could get. Apparently not.

Living on the New World, in 2257, is young Todd (Holland). He lives in Prentiss Town, named after its mayor Prentiss (Mads Mikkelsen) that is only populated by men, as is the world seemingly, living a fairly basic life.

For some reason though, all the thoughts the men have can be heard by all those around them, known as ‘noise’, so keeping secrets is quite challenging.

Out of the blue, the sky to be precise, a spaceship appears, crashing near the farm Todd lives on. When Todd investigates, he discovers a lone survivor, a young woman known as Viola (Ridley). His first instinct is to inform the mayor, which he later regrets, as he’s far from happy to embrace a female into his community. Prentiss learns that Viola is from a ship with 4000 on board, looking for a new home, and that all his hard work will be undone if it lands. So Viola has to go.

With only just being introduced to the female of the species, Todd believes it’s wrong to wipe out the only woman on the planet, especially as she can keep her thoughts to herself, and so he sets off with her to escape the clutches of Prentiss and his men, who are hot on their tails. 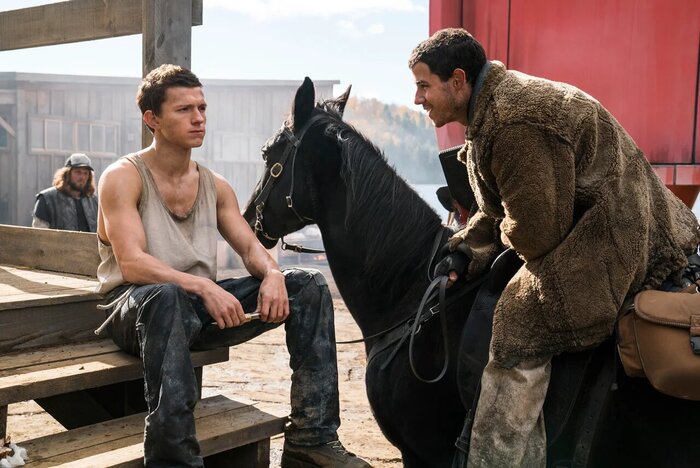 Bet you wish you could hide behind a mask for this stinker huh!

If you’ve bought into the premise that a film featuring the thoughts of men available to everyone is a good idea, which clearly Liman did, inexplicably, then its execution is paramount. Unfortunately for this film it’s the first major stumbling block that it never recovers from. The majority of men are not really known for their deep thinking, which is along the lines that Liman goes, with some really bland inner/outer dialogue. You can see how you could at least have a little fun with it, but fun isn’t what Liman is going for. Which is ironic when you consider that the device he uses to show that men are thinking out loud is visually presented as a head fart. All that can be said is thank goodness it wasn’t also a Smell-O-Vision presentation, because it would bound to be really whiffy.

With not much in the way of set pieces, Liman relies on his two young stars to run through the woods. A lot. At times it feels as if it might be sponsored by Nat Geo, as they yet again run past some fine pines.

And then you have David Oyelowo, who plays a religious figure, who you can’t help but feel sorry for. His character is never really explained and just turns up occasionally, ranting in thoughts, before disappearing again. It’s as if Liman didn’t quite know what to do with him, but wanted him in the film anyway.

To their credit, Holland and Ridley come out of the whole experience better than most. There is evidence of a relationship there, and some on screen chemistry, but despite their ample screen time, including all that running through the woods, even their pairing isn’t enough to make this curious sci-fi more palatable.

Perhaps the book on which it is based, written by the film’s screenwriter Patrick Ness, is a better medium to use for masculine thoughts, as they are still words on a page; Liman’s interpretation for the screen just doesn’t work however, looking hoaky at best. Which leads to the question – when it came to choosing this odd project, what was Liman thinking?