It’s weird how pre-conceptions about sequels can work differently. Take the film world; the rule of thumb for any sequel is that it will be inferior to the original. Just think of all those films you’ve seen with a “2” at the end of the title, and remember how disappointing all of them were.

In the world of gaming however, the pre-conception is that the sequel is always better – unless you’re playing Pro Evo Soccer of course. This proves that developers are better at taking feedback from a game and implementing changes far better than your average film producer. The truth is that often this is indeed the case, but there’s a varying degree as to how much better that needs to be taken into consideration.

When we came across Dragon Quest Builders for the Switch, we were pleasantly surprised at how much we enjoyed the experience; none of us are that excited by the RPG genre, but were won over by this particular game’s undeniable charm.

It was an understatement to say that when the sequel made its way onto our Switch, some of us were a little giddier than should have been humanly possible. And thankfully, the game doesn’t disappoint. 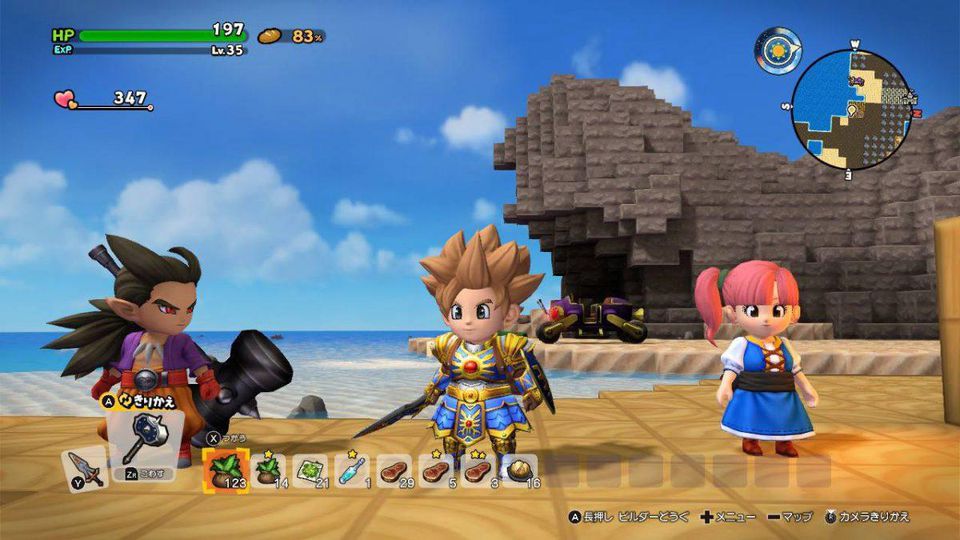 It was at this point that Steve bitterly regretted signing up for Ex on the Beach.

You play the hero of the piece, natch, who has the ability to build things. This causes panic at first, as thanks to the dark forces known as the Children of Hargon, building has been outlawed. Your presence then, makes the locals a tad nervous. But when you prove your ability to improve things by planting crops, building bedrooms, kitchens and loos, they start to come around to the idea.

Before you know it, you have your own cult and they will pull together and start working as a community. Which is just as well, as you will need a fair few of you, to defeat the evil lurking in the shadows, waiting to destroy everything you’ve created.

Although the first game was great fun to play, it did have its faults. By following all the rules of a good sequel however, Square Enix have improved the experience no end.

There is no longer just one land to work with, but many, which you will eventually have access to via a boat that can ferry you about. Each land has different requirements from those that live there, so have to be addressed accordingly. And although there’s no getting away from the blocky look and feel of the game, which is quite pleasing as it is, each locale manages to have its own distinctive personality.

The mechanics for building have also had an overhaul. It’s now much easier, with pointers letting you know what you need, as well as blueprints for certain types of rooms etc that make the crafting of buildings a doddle.

The developers have also worked hard on the characters you interact with, giving them rounder personalities, that makes hanging out with them a far greater experience. There’s a surprising amount of humour too, including references to mucky magazines, which is a tad unexpected but a fun addition nonetheless.

It also feels pleasingly deviant too. It’s not just communities that you are creating, but a cult of your bidding, and you can’t have more fun than that. 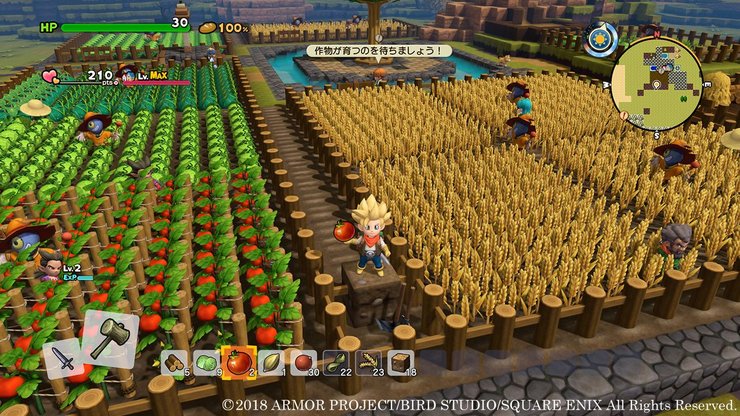 I'm gonna make the most of this crop because post-Brexit, i'm royally screwed.

It’s also nice that there’s a real sense of balance about the game-play; when you have farming and building issues to deal with, you often have to down tools, pick up weapons instead, and fight off the villains keen on screwing up everything you’re building towards. These fights and battles aren’t exactly taxing, but they are a useful way to break up the on-going building works, which it has to be said, can soon become quite addictive if you let them.

Considering none of our team are really taken with the RPG, Dragon Quest Builders 2 proved to be the exceptional exception to the rule. It has bucketsful of charm that it plasters on every wall, landscape and screen making it a joy to play.

Admittedly it borrows heavily from a lot of other titles, with elements of Zelda games in particular liberally used, but it shouldn’t take anything away from the overall experience that comes from playing it.

This is one title where if you have a creative side, and enjoy a building/farming sim with a touch of fisticuffs on the side, then you should most definitely get the DQ Builders in.

Square Enix have effectively built the perfect sequel, and you can’t ask for more than that.