It’s incredible to think how ahead of its time 1982’s Tron was considering how the home video gaming industry was still in its infancy.

The film, with its unique visual style, took audiences on an adventure inside an actual video game, where its human protagonist Flynn (Jeff Bridges) had to take on the killer code out to get him to survive.

Fast forward nearly forty years, and the games industry is now worth more money than the film industry. It’s no wonder then that Hollywood acknowledges not only the growth of the industry, but its global popularity, by jumping on the pixelated bandwagon by either taking a gaming franchise to the big screen, like Tomb Raider or Resident Evil, or creating films with original gaming themes, such as Wreck-It Ralph and Pixels.

It was probably only a matter of time then, before a film took a deep dive into the gaming world, by once again taking audiences into the playable world to meet some real characters.

No, you say it first you tease.

On his way to work in Free City’s bank is Guy (Ryan Reynolds); he is a creature of habit so always stops off at the coffee shop for his hot cup of Joe, before meeting up with his best friend Buddy (Lil Rel Howery), a guard, at work.

But everything changes when a woman he’s never seen before appears in the game; her name is Molotov Girl (Jodie Comer), and Guy suddenly believes that she’s the woman of his dreams. She is in fact not only a real life human playing the game, but she’s also a games developer, who created some of the original code of Free Guy.

She’s entered the game to try and discover some of her original code, which she created with Keys (Joe Keery), who now works for the man who stole it, Antwan (Taika Waititi), head of Soonami Games.

It doesn’t take Molotov Girl, AKA Millie, to realise that there’s something different about Guy, and that she might actually have something to do with it, with her Artificial Intelligence coding to be semmingly smarter than usual. 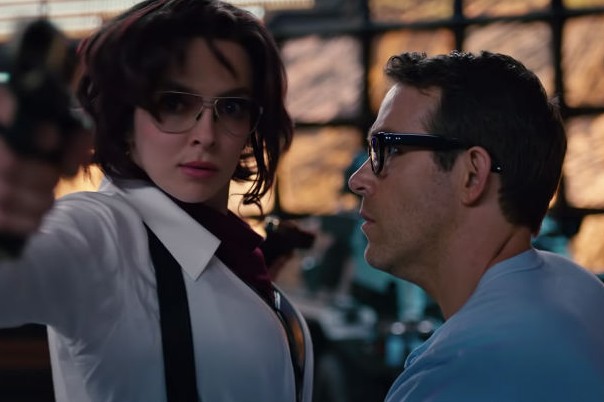 Wait a minute, you don't sound like that Killing Eve chick?!

If ever there were a film that was a wet dream for gamers, it’s this one. Free Guy is an unapologetic love letter – or maybe that ought to be sext message – to the world of video gaming. It is set in an open world that gamers are familiar with, concentrating on NPC’s, a term that its specific jargon to these types of game.

It’s actually one of the sticking points of the film, because there will be a generation or two completely unaware of this terminology, and yet really love the loveable Reynolds. It makes it a harder sell, but the film attempts to broaden the film’s appeal by also making it a romcom. Unfortunately it struggles to have these two worlds coexist.

You can understand why director Shawn Levy did it, as focusing on just non playable video game characters would have been too isolating for many, but the blending of the two entities doesn’t really work. The film’s plot might even be somewhat geek heavy for the most devoted gamer, as it occasionally suffers from the weight of having too much jargon.

Reynolds can’t be blamed however, as he is in truly sharp form, and certainly shines when the film is at its best with his character Guy interacting in his own world of Free City. He gets some great support from Howery as his sidekick, who actually manages to outshine Reynolds in a number of scenes.

Comer is acceptable as the love interest, but no more than that; her performance is less convincing, with some of the close-ups of her almost having gurning at times, still it’s her first big Hollywood gig, and there’s no denying her talent, so she just might need to settle into it.

The film also suffers from a soggy middle section, following on from a promising start, before picking up again for the home run; with a bit more work, possibly including some liberal editing here and there, the film would have been a far tighter and energetic experience.

Although it is a film set in the gaming world, it’s more likely to be remembered for cementing Reynolds’s comedic abilities, making him that bit more of a bankable A lister.

But if levelling up, crafting and setting off on a mission are your thang, then this guy is for you.