Everyone loves Tom Hanks. That’s just a given. If he were British, he would already be a national treasure.

Of course he is known for is countless memorable performances in classic films. What’s less known however is that he dabbles in writing occasionally. He wrote the 1998 mini-series From Here to the Moon, an episode of 2001’s Band of Brothers, as well as three screenplays: 1996’s That Thing You Do!, 2011’s Larry Crowne and now this WWII drama. 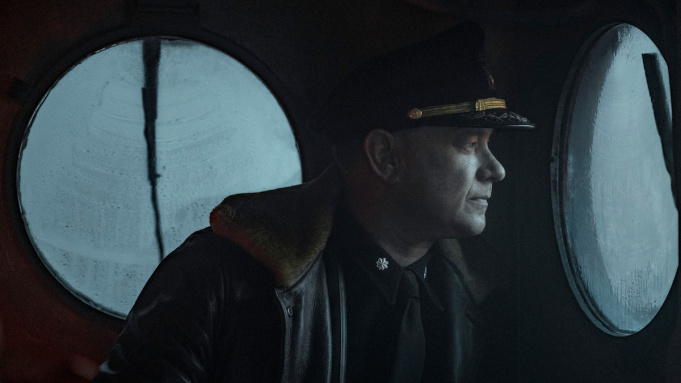 Damn this weather. I fancied a paddle later.

1942, in the middle of the Atlantic, and Commander Ernest Krause (Hanks) is heading a convoy of allied ships to the UK, on board his destroyer that is given the codename Greyhound.

He is tasked with navigating dangerous waters, and keeping the convoy as safe as possible. Unfortunately this means travelling over the notorious Black Pit in the middle of the Atlantic, where in its murky depths lurk enemy U-boats, using a technique known as the wolfpack, which would see them attack their prey in numbers to guarantee a kill. 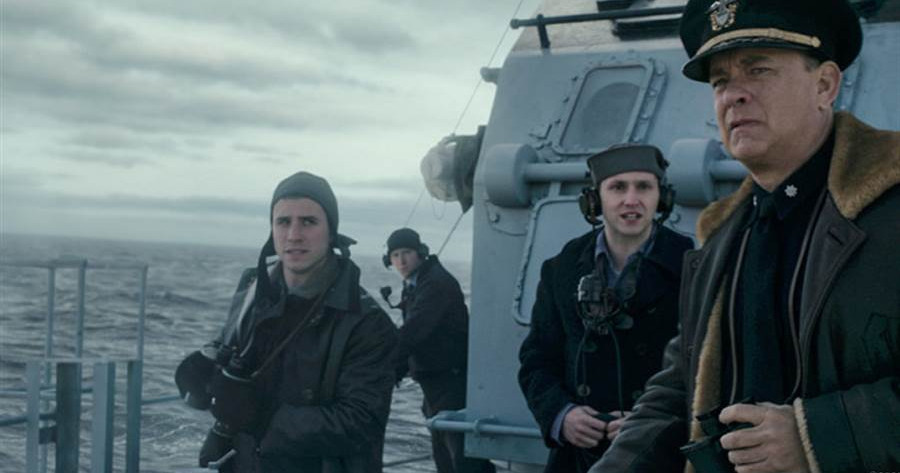 Guys, have any of you seen him move? He's been in that position for 5 days now.

The first thing that may grab your attention regarding this film is that the hound isn’t the only thing grey about it. It appears that when director Aaron Schneider was offered a colour palette for it, clearly the only Pantone reference chart available was the greys. From the uniforms, to the vessels, to the shade of the choppy sea, to the pallid skin tones – all grey. So much so that it makes you think that perhaps they should have shot the whole thing in black and white, which perhaps wouldn’t have been a bad call.

And unfortunately for Hanks, its visual look isn’t the only thing lacking colour. The script amounts to nothing more than an endless list of Hank’s character barking commands for ninety minutes. There are brief moments where this is interrupted with close calls with the enemy, but then it’s more of “move the ship to the right a little”, and “no, just a smidgeon more to the left now”.

It’s understandable that director Schneider wasn’t going to mess with his star’s script; after all, he made his directorial debut in 2009 and hasn’t directed a feature since. Perhaps his rustiness accounts for all the other disappointing elements too. For example, there hasn’t been a recent release that is so obviously CGI heavy, suggesting that the closest any of the cast members ever got to water was drinking at The Anchor pub near the studios. You just know that there was one junior member of the crew who was tasked solely in spraying the brow of Tom Hanks, anytime he left the bridge to step ‘outside’.

The film certainly has a romping pace about it, much of it feeling as if it were shot in real time, which makes it short running length commendable. That said, it does feel it’s at the expense of character development; not only are the crew all rather clichéd and two dimensional, but the enemy are faceless for the most part, with their part in the conflict reduced to evil, cackling taunts over the radio.

Overall there’s no denying that Schneider’s experience paid a heavy price on this feature. If nothing else he should be condemned for allowing co-star Stephen Graham so little to do; he’s a major talent and reducing him to being Hank’s occasional sidekick is a cinematic crime.

Hanks, as you would expect, comes out of it relatively well, with Krause falling well within the category of one of the affable good guys that Hanks can play with his eyes shut.

But with war films going through a major rehaul recently, with the likes of epics such as 1917 and Dunkirk, Greyhound relies too heavily on visual trickery, at the expense of telling a story about the lives of those fighting for their countries at sea.

Don't be surprised then that after viewing, you may be left with a sinking feeling.