The older one gets, the more one tends to hear the phrase ‘well, they were different times’, to excuse the poor behaviour that took place in the past, and to somehow justify something that was really never OK.

Falling into this category is a children’s puppet show that’s USP was literally domestic abuse, all in the name of family entertainment. Different times indeed.

Taking a fresh look at this perverse dynamic is Australian actress Mirrah Foulkes, who makes her directorial debut here. 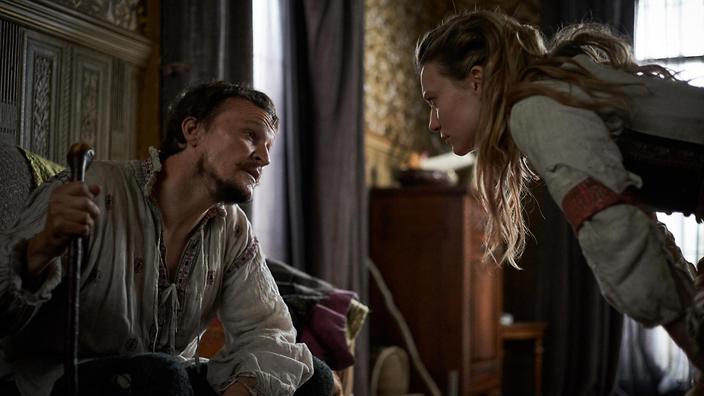 It's true I'm telling you, Pinocchio is my cousin!

In the town of Seaside, nowhere near the sea, lives the self-proclaimed puppet professor, Punch (Damian Herriman) and his talented wife Judy (Mia Wasikowska).

They regularly put on shows for an unruly crowd, with Punch putting in a few more ‘smashies’ and ‘punchies’ as the audience respond well to them, much to Judy’s disappointment.

Although Judy loves Punch, he has another love in his life – alcohol. He behaves poorly after one too many, and he’s promised Judy that he’s going to keep away from the stuff.

But Punch is far too weak-willed to actually keep his promise, and soon finds himself on a bender as soon as Judy is out of sight, one that has some truly tragic consequences that affects them all.

Despite being puppets, they were still saddened by their performance being reviewed as 'wooden'.

The premise for Foulke’s debut, that she also wrote, is a promising one. The relationship between these two popular characters has never really been examined in such a way, and it’s certainly ripe for material.

And although Foulke’s set-up is pleasing, by its end there’s a feeling that she doesn’t fully commit to it. The story is so grotesque that that in itself should have been enough to give her carte blanche to really push the boundaries of black humour. But it’s as if the film uttered its own safe word fairly early on, and thereby deciding to go with a more disappointingly fairytale route.

It’s a shame as everything else was set in place, from the punchy performances, to the almost Gilliam–esque cinematography and set design, if only Foulke’s went to town in bringing more of the macabre to the surface.

Some interesting elements then, but ultimately it’s a missed opportunity; not only could it have put the abusive relationship under far more scrutiny, it could have been funnier, darker and had the guts to offer a knock-out blow, instead of the somewhat limp slap around the face it delivers.

***Fancy winning a copy of this title? Then enter our competition! For your chance to win a copy on Blu-ray, click here to enter.***