Perhaps one of the most testing elements surrounding this long-running driving game must be naming them.

Since it pulled up to the bumper for the very first time in 1994, the main franchise has grown considerably, with this entry being the twenty-fourth release.

Sure, it needs to look good, that’s a given, but what do you end up calling them after so long? The series has been ‘undercover’, ‘unleashed’ and ‘underground’ to name but a few. At some point in the future could we see NFS Cruising, NFS OCO (One Careful Owner), or even NFS Middle Lane Hogger? Time will tell. For now though, we have ‘Heat’, which seems such an obvious choice, and one that feels like it should have popped up sooner, but here it is, at last. 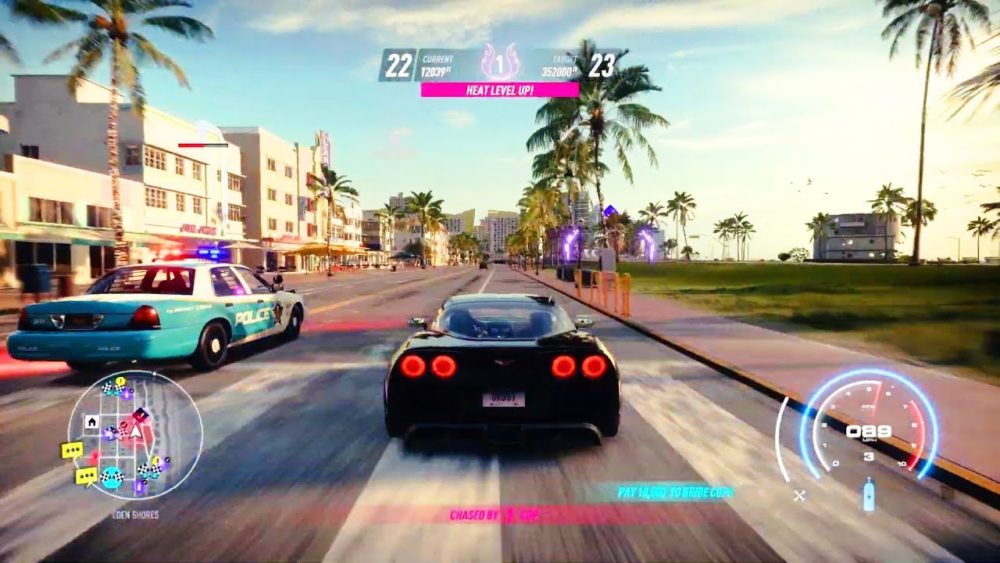 I'm not pulling over, they started it with the flashing lights nonsense - what are they, a portable disco?!

You think it would relate to the weather, but for the most part it’s filthy in Palm City, with it getting regular downpours, but hey, that’s climate change for you. The word is more relevant for the relationship you have with the law; Lt. Frank Mercer of the Palm City PD is cracking down on street racing in a big way, so much so that he’s willing to overlook the law to clean up the city.

As a rookie driver, this makes your pursuit of racing glory that little bit trickier. Joining a crew helps, having them to watch your back, but you still have to prove yourself where it matters – behind the wheel on the streets.

One of the first things that may grab you about this title is that it’s really committed to the story mode. And considering how other racing titles don’t even usually bother, it gives the NFS series in general, and this title in particular, a nice hook to hang its driving ambitions on.

It’s not the only thing it has up its exhaust either; where in the past they’ve been set during the day, or at night, this entry uses the time of a day as a major component. During the day, you can take part in legitimate races, where you won’t have any issues with the law, and pick up financial rewards for your troubles. The night time however, is all about earning respect amongst your fellow racers; the races are all illegal, and you’ll be rewarded with rep for your efforts. However, due to their illegal nature, you will be hounded by the police, and if you get busted, any money you would have earned for that period will be lost.

Its a simple premise, that works remarkably well, as you have to balance your approach going forward during night and day. If you just ride during the day, sure you’ll have wads of cash, but without the rep from driving at night, you will be limited as to what you can access in terms of new vehicles and upgrading the ones you already own. So to progress, you will have to play at all hours of the day and night.

Although it all takes place in an open world, which you can explore to your heart’s content, with various little side missions you can take part in (from spotting graffiti to crashing through old billboards), the races are fixed circuits. 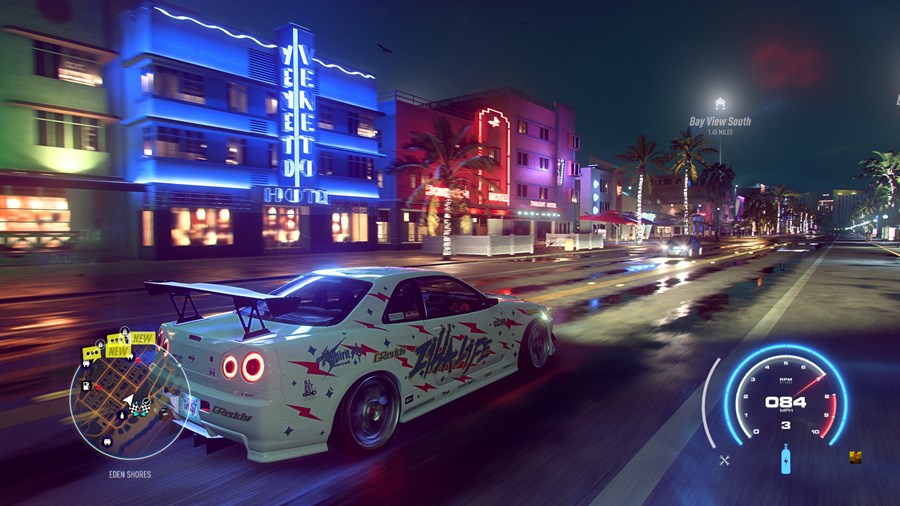 Aw c'mon, there has to be a KFC around here somewhere...

These can be frustrating at first, as many are no pushovers. For instance, the AI occasionally feels a little out; you could have led a three lap race for two laps with no issues, and then suddenly find yourself being overtaken a number of times in the last lap, despite making no mistakes yourself. If this happens, the best thing to do is to either upgrade your ride any way you can, and have another crack at it.

Some of the circuits also feel like they were designed by life-long pedestrians; the ones in the city itself can have a number of sharp corners you’ll have to manoeuvre through, and you may just find yourself flying head on into an unmoveable object, like a pylon that seemingly appeared out of nowhere, which effectively means your race is over. So don’t necessarily expect to win on your first time around the course.

This annoyance is multiplied during the night events; because it’s illegal street racing, there are other vehicles on the road that you have to contend with. More often than not, it will feel like your car has the only magnet on it to attract other vehicles, as your opponents seem unaffected by moving traffic. So if you hit another car hard, again, it’s probably race over for you.

It’s at this point where you can only dream of a rewind trigger, the kind that appears in other racing titles, which give you that second chance to take that corner. However, although running into trouble literally in sight of the finishing line is infuriating, the game doesn’t make any excuses for it. It just means that you will have to take on the race again, which will only improve your racing skills over time, and therefore make you a better driver.

One of the game’s biggest draws is its looks. We played our version on a PS4 Pro on a 4K TV, and some of the effects are just jaw-dropping. The lighting in particular, both during the day and night, is just sublime. You may well be in the middle of a race, but still find time to notice the glorious reflections in the pools of water on the road as you drive through them. Or the way the neon lights look at night. All in all, Need for Speed Heat has to be the best looking in the series yet.

Yes some of the races may feel they’ve got it in for you, so it’s just as well that the handling of the cars is, for the most part, excellent. If you’ve happened to have played a racer in the past, the mechanics of drifting around corners, knowing your braking points etc, will come naturally to you.

There is of course the ability to upgrade your rides, with new engines, exhausts etc. This element is probably the most confusing part of the game, with possibly too many options available, the kind you would expect from the likes of Forza, and not an all out arcade racer like this. Still, even if you go the basic route, you can still get the benefit from it.

The game also has a solid soundtrack, which means that it probably got the majority of the EA soundtrack budget this year, much to the FIFA team’s annoyance. There’s some nice variation in the tracks used, to the point where we never once felt the need to change the radio station.

It must be one of the most difficult challenges with a long-running franchise, not just naming it, but bringing something fresh to the table. Need for Speed Heat admittedly has a few speed bumps, but overall, the day/night concept is nothing short of genius; it’s no longer just a gimmick, and far more an integral element of gameplay, and should be recommended for that alone.

With more driving titles going the simulation route, it’s satisfying to see this latest NFS entry embrace its arcade routes, with this rip-roaring, pedal to the metal effort. Feel that speedy need? In short, own it.