Double, double, toil and trouble, fire burn and cauldron bubble. Fine words from Bill Shakespeare no less from his hit show Macbeth, specifically from the crowd pleaser ‘Song of the Witches’. Just one example of how witches have been used for entertainment value over the years, and let’s face it, what’s not to love? They dress for Halloween daily, often have quirky footwear, and can cause endless hilarity with spells often involving turning humans into frogs.

So it’s disappointing then that this belated sequel can undo all that good work in one fell swoop. 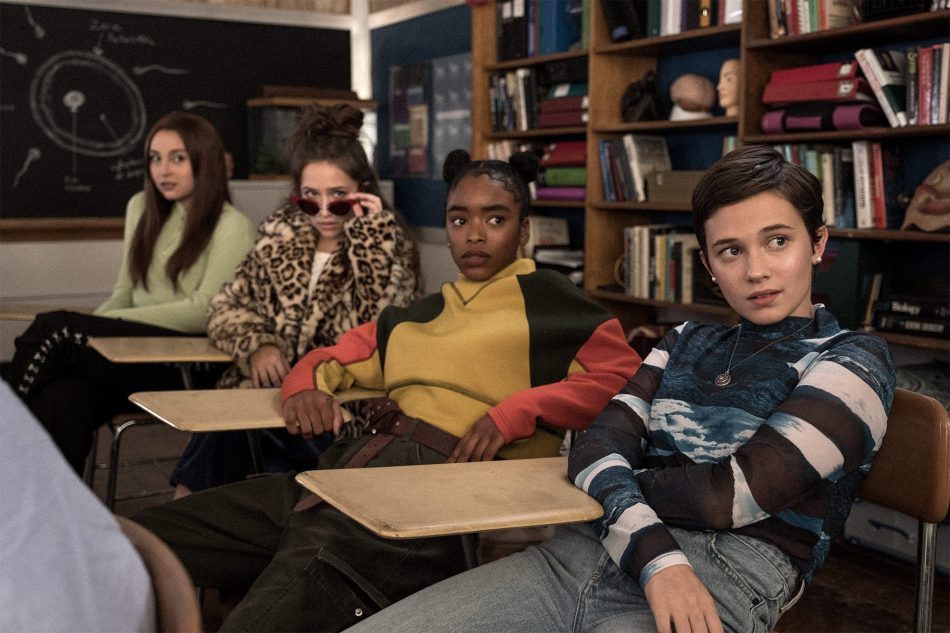 How long do you think he can keep it stuck to the window like that for?

Due to her mom Helen (Michelle Monaghan) falling in love with new man in her life Adam (David Duchovny), Lily (Cailee Sapeny) finds herself having to move to a new home and be part of another family.

This also means having to attend a new school, where she doesn't know anyone. Her new start is also marred by an embarrassing moment in class, which is made worse by class bully Timmy (Nicholas Galitzine).

Luckily for her, she is helped out by Frankie (Gideon Adlon), Tabby (Lovie Simone) and Lourdes (Zoey Luna), who just so happen to be witches. They recognise something in her that leads them to believe that she’s a witch too. And after a quick discussion she agrees with them.

Now as a group of four, they are technically a coven, which means they can finally unleash their powers, but as they soon discover, not everyone is a fan of witchcraft. 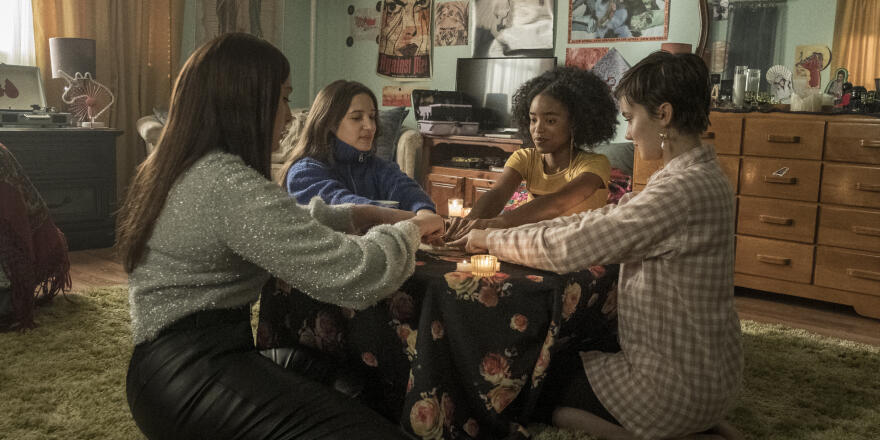 Is there anybody there? No, not there, watching us silly! No?

Actress Zoe Lister-Jones, known for her role as Jen in the TV show Life in Pieces, was handed the responsibility of both writing and directing this sequel to the 1996 original, and it’s quite astonishing how spectacularly she fails at the challenge.

Firstly, the term ‘writer’ must be used fairly loosely, as there is no story as such. Lister-Jones clearly has another, more urgent agenda, which is to appear as ‘woke’ as possible. This is a film that sees witches of today, in an environ that embraces sexuality and the fluidity of gender. Thankfully a Ouija board is seen on screen a few times, just to keep the appearance of magic going.

Her biggest trick however is somehow to have possessed the body of middle-aged writer, as her references seem a little out of whack. These are hip, with it witches, and yet they listen to an Alanis Morissette album that’s over 26 years old, and reference Ridley Scott and his 1979 film Alien. Are teens really making these archaic references in 2021? No. No they are not. The closest they get generationally is 2008’s Twilight, which only goes to prove how completely out of touch Lister-Jones is with her target audience.

And it may well be commendable having a trans gender actor in a main role, but by making the character trans gender dampens the casting, feeling more like a firm tick of a box for some equality assessment. It’s difficult to see why the witch in question needed to be trans gender, other than to tick a further on screen box, rather than a female witch who could be played by the trans gender actor. That would certain feel like progress and a step in the right direction, as opposed to this seemingly self-righteous attempt to appear to be supporting a community.

It’s also a surprise that a film about witches features so little in the way of magic. Perhaps the use of the dark arts was considered too much of a risk on such a sensitive woke audience, and therefore was used sparingly.

The fledgling director, on what is only her second feature, also struggles with getting anything remotely resembling a performance of note from any of her cast, including her brew of young witches, making the film a highly embarrassing legacy, as opposed to be one to be proud of.

Lister-Jones is clearly no fan of magic nor witches, which is why she made this abomination. She has no doubt rustled a few feathers within the community, who are surely toiling over their cauldrons in a bid for fitting retribution. It will be interesting then to see how the director progresses with her next project, in her new amphibious form. Let’s face it, anything to slow her down after this abysmal effort can only spell good news for the rest of us.