If you are one of the biggest brands in the world of film, the universe and everything, you must always be seen to be moving forward, even if you’re actually going backwards, as in this case for Walt Disney.

Not only was their original 1994 version of The Lion King an outrageous success, it even managed to spawn a hit stage musical. But the franchise clearly had more to give in the eyes of Disney. And so this not-live-action-but-photo-realistic remake was born. 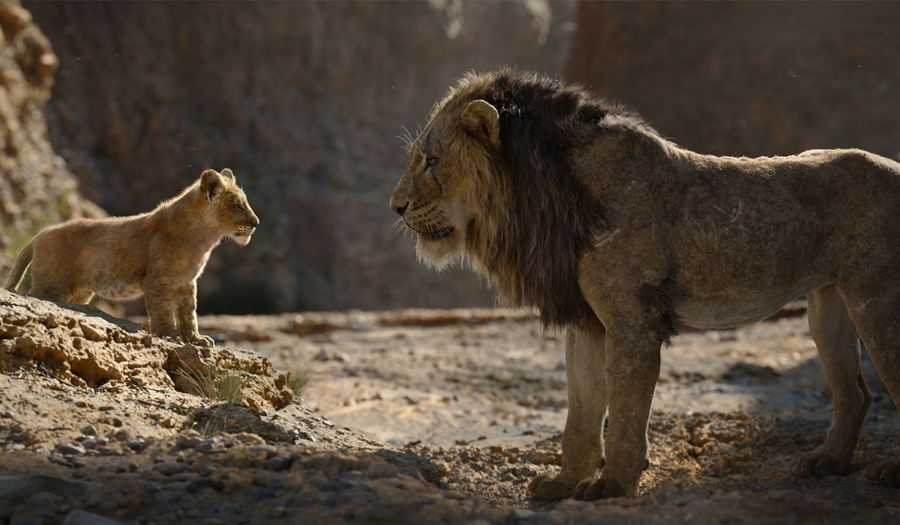 And to complete the humiliation, they expect you to sing too. So yes, run, save yourself!

The plains of Africa, and Mufusa (James Earl Jones) is the lion king of all he surveys, much to the chagrin of his brother Scar (Chiwetel Ejiofor). What’s worse is Scar knows that the line of succession will bypass him completely and go to Mufasa’s son cub Simba (JD McCrary).

So he decides to hatch a devious plan to oust this royal lineage the only way how, sending a young, guilt-ridden Simba into the wild to fend for himself.

Luckily for him, he encounters Pumbaa (Seth Rogen) and Timon (Billy Eichner), who take the young cub under their wing, and watch him grow into adult Simba (Donald Glover), the perfect specimen of his species.

What Simba doesn’t realise however, is that his family and friends are now suffering under the ruling of Scar, who only cares about his own well being, and has no time for his father’s legacy. 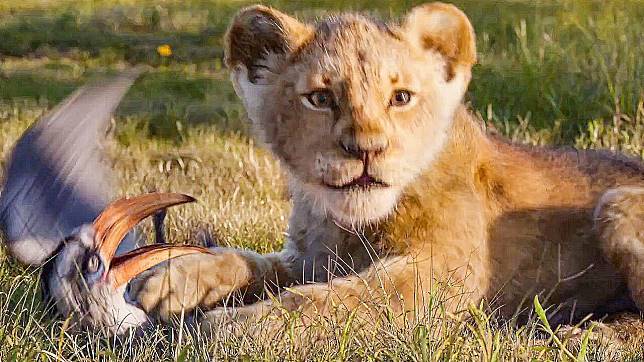 Ooh! Is that someone opening up a pack of Dreamies I can hear?!

There’s been a lot of chatter recently about fake news, which may well have been the inspiration for director Jon Favreau for this new version. The technology for many fake news stories now, is to make the person in the video appear to be speaking about something, when the reality is that they’re not. And that’s basically what happens here; animals looking as realistic as can be, are seen to be speaking English. Oh and singing too, let’s not forget about that.

It’s a hideous mix, that soon becomes too much to tolerate. After a while, it just looks like the mouths of the animals are simply moving up and down, which maybe the case if they were attempting to speak for real. But here’s the rub – they don’t.

You can get away with talking animals in an animated feature, as Disney have made a healthy legacy from doing so, but making life-like animals talk – and sing – is just perverse.

To add insult to idiocy, the majority of these African beasts speak with a US accent. Because the young cub of a lion king is going to have a hint of a New York accent about him.

Of course Disney photo-realistic isn’t that realistic; although the film involves the fighting of some animals, there is neither a scratch or a drop of blood to be found. So it’s more believable for a lion to burst into song than bleed. So Disney.

And we know that Disney now own the Star Wars franchise, but they could have made James Earl Jones tone down the Darth Vader voice. It’s so strong in him, that you half expect him to announce "Simba, I am your father".

And then the film has the audacity to be thirty minutes longer than the original. Which means more not real animals looking pretty realistic as they talk and sing their way through the African setting.

There’s a chance it has opened Pandora’s Box, with this swipe generation growing up to believe that animals can truly talk shit and sing, to the point where they expect documentaries like Life on Earth to feature penguins in their natural environ, to not only talk about their days, but to burst into a rendition of R. Kelly’s I Believe I Can Fly at any given moment.

At one point, it even feels like Favreau loses faith in the premise, when two of his characters simply stop mouthing the lyrics, but the song continues regardless.

Of course the idea of real animals talking on screen is not a new one. One of the most memorable occasions of its regular use could be found in the children’s BBC show Animal Magic, where the adorable Johnny Morris would voice-over dialogue of animals living in Bristol Zoo. It was charming and effective, and that was during the late sixties through to the eighties.

This just stinks of an exercise in crass commercialism, with Disney prepared to do whatever it takes to make even more money from their vast library of classics, without any cares for artistic integrity.

There’s only one element of this film that works, and that is the relationship between Rogen and Eichner’s characters, where for a few brief moments, some semblance of personality is on view.

It’s not enough however to detract from the fact that this version manages to be a heinous affront to both nature and cinema. Hakuna matata that.