Tom Basden is the writer and star of ITV2's comedy Plebs. We grilled him on many topics, including the future of this Ancient Rome comedy.

Tom Basden starring as Aurelius the water boy in Plebs.

They say that Rome wasn’t built in a day. But what they don’t tell you is that when it was built, it was in Bulgaria. True fact. In the back lot of the Nu Boyana film studios to be exact, where the likes of 2014’s 300: Rise of an Empire and The Legend of Hercules have both been filmed. Piggy backing on a perfectly functional set of ancient Rome has been ITV2’s comedy Plebs.

Not only has actor Tom Basden appeared in nearly every episode of the show, starring as water boy Aurelius, he’s pretty much written them too, along with co-writer and director Sam Leifer. And for him, filming in this south eastern European country, there’s no place like it. “It’s a really interesting and beautiful place,” says Tom “and the crews that we work with are really lovely. One of the benefits of it are i think is because it’s not a natural tourism place, it means you really can kind of live there for a bit. Not as in truly immerse yourself in it, because it is still quite foreign, and Bulgarian is quite a hard language to get anywhere in, but you can really concentrate on working, so that when you have time off you can go and do what Bulgarians do”.

And what might that be? What is big in Bulgaria to do? Well, according got Tom, football matches, Speed skating and gymnastic tournaments are popular, although not all at the same time, obviously. “You can do the sightseeing stuff in a couple of days and when you’re done with that, and when you’re into the fourth series of something, and you’ve been there quite a lot, you begin to find interesting places and things and stuff to do. I’m really grateful that that’s where we shoot it, rather than Wimbledon Studios or something.”

They’re also lucky that not only does the set still look authentic, which, let’s face it, can’t be that difficult for an ancient Rome replica, but they’ve also been allowed to add bits on, like they’ve done in this fourth series by adding a bar that was once a public toilet, called ‘The Crown & Toga’. “That’s kind of the cheat of it in a way, that we shoot it there exclusively because they have this standing set that they built about twenty odd years ago, and it was only supposed to last a year or two, but they preserved it, we found it and encouraged them to add more bits to it and keep it looking good, which means that we can make something that feels like it has production values that are much higher than we could do either in a studio in the UK, or say we shot it in the CineCittà set where they shot Gladiator, all of the money would go on the set, we wouldn’t be able to do anything else. “

Adding a new locale also allows characters to be seen in a new light. “One of things we were most excited about this series was embracing the change of it, the slight reset,” Tom explains, “ not just to introduce a new home for them, but to free characters up; for instance, Grumio wouldn’t have gotten involved in any of the work stories before. Now we can keep them all together. It’s a slightly more organic way to bring stories in and out by having a bar. I guess given how many sitcoms are set in a bar, we should have realised that some time ago. We really enjoyed writing this series. Suddenly a lot of new possibilities open up when you re-locate.”

Of course, the move also allows the opportunity for Tom to write the character Aurelius – who he also just so happens to play – into more of the storylines. “It’s a deliberate move on my part to grab more screen time on the show” Tom admits unashamedly. “I know it probably looks like that! When we decided the boys were going to have a bar, and Aurelius was going to get a job there, there felt that there were quite a lot of stories to involve him in. And also, in the writing, we kind of started to enjoy the competitive frenemy relationship between Jason (new Roman on the block, played by Jonathan Pointing) and Aurelius that was emerging, and we started to do more with that. “ 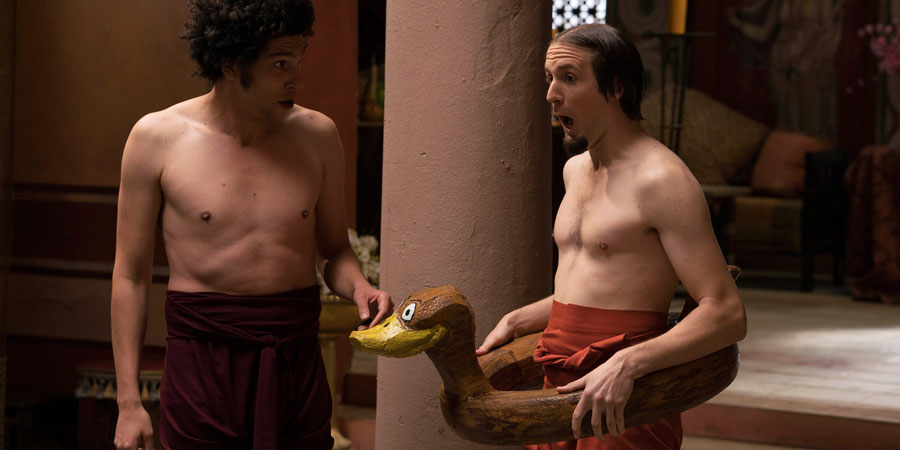 And that brings up the interesting dynamic of being not only a writer of the show, but one of its stars too. Can that rub up other cast members the wrong way? “I think it’s quite hellish for them actually, I’m sure it is, because I end up sort of giving them notes and suggestions and stuff. To be fair, they are such a lovely bunch, and they’ve always been good natured about that kind of thing. But there probably is a bit of split focus from me occasionally. I’ll try and handle it well, I’ll talk to Sam about it, instead of giving them notes directly”. Does that mean that someone might be a tad too chicken to do it themselves? “Yeah, probably!” he admits, “ but sometimes actors can be very precious about it, getting notes from other cast members. I do find that comedians are really, really open to it, because I think that comedians just want things to be as funny as they can be, I think there’s less of a drama school process, building a character in your head preciousness, it’s like we’re all here for the same reason, we want this to be really funny and really work. If the writer’s got a sense of what might help, then you kind of want to hear it. If I’m acting in something, then I’ll always want to hear it if the writer’s got any thoughts because it’s usually really, really useful. But not everyone wants that.”

The show itself appears to be in pretty good shape. Although not yet confirmed by the powers that be that a fifth series is yet set in sandstone, Tom is “optimistic” it will happen. Not only that, but there’s a chance it could make a little history of its own, as there’s a rumour that a US remake is on the cards. “It’s both true and something that could happen.” Tom declares, although it’s all early stages stuff. “we’re writing a script through Seth Rogen’s company, for Amazon, I guess there are a lot of yeses that we need between that and making and broadcasting a US version of the show, but tonally it feels like a good fit; the sitcoms that we had in mind when we were writing the show were like Seinfeld and South Park, and I guess Cheers slightly with the bar location, so I think that it does feel more like an American show than a British one at times. I’d hope that an American version would work, but obviously you just never know. There are no cultural references that we need to explain or water down, as it’s equally foreign to Americans and Brits being set in Ancient Rome anyway.”

So, a small ITV2 comedy could be about to invade the US of A. But isn’t there a possibility that the show might have to change its name? Wouldn’t it get lost in translation? “I don’t think it would. In recent years, the word Plebs keeps coming up. It came up here when we made the first series, with MP Andrew Mitchell calling a policeman a ‘pleb’ outside Downing St, and I think the word has been used by Republicans and stuff, so I think we possibly could.”

But it’s not just the name that might prove to be an obstacle – there's history itself. “The other thing we don’t quite know yet is how much the average American knows about Ancient Rome; I think in the UK there’s a bit more awareness of what happened there. Maybe we’ll just say that it’s set in Italy now. “ That might work. 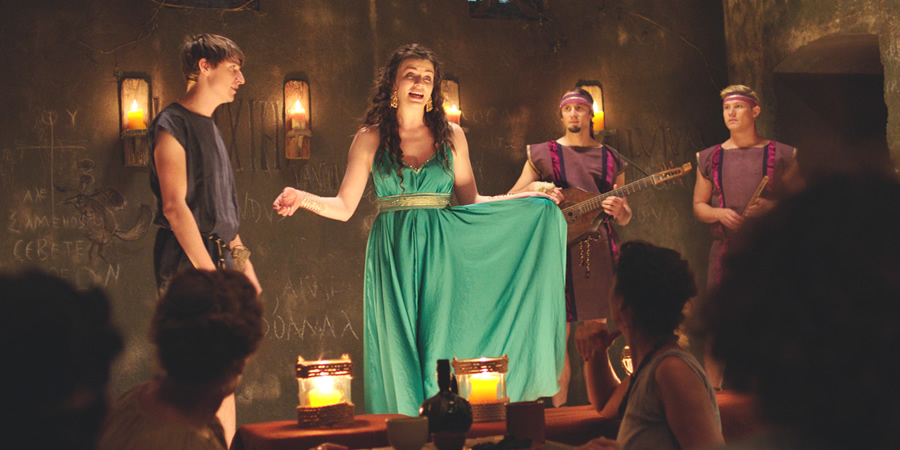 And it’s not only the show’s future that looks bright. Tom’s next acting gig is a big one. “Next month I’m going to start shooting Ricky Gervais’ new show for Netflix”, he announces all matter-of-factly. “That’s going to be fun” Tom says, of appearing in After Life. But like any decent Roman worth his salt, he has other irons in the fire. “I’m also writing some other new things that I’m going to try and fit in between that and other Plebs that I’d rather not mention as there’s every chance they won’t happen.”

His optimism for his own show appears to also include TV comedies in general, particularly on our shores. “I think one of the good things at the moment, being a writer and performer, is that there’s so much stuff and so many people to write for. Even ten years ago there weren’t many outlets; you’d get turned down by one channel and that was kind of it. But now there are loads of places to take things. I think that extra competition has really helped. There’s lots of good stuff being made.”

But being the fine, upstanding Roman citizen that he plays, his words do come with a caveat. “I would just hope that there would continue to be a wide range of things, and that commissioners back scripts that are really trying to be funny. There’s a danger that that becomes a bit old fashioned or slightly distasteful to have funny characters being funny, rather than sad characters being truthful.” He adds “I prefer to watch stuff that is trying to be funny and has lots of jokes and really daft characters like South Park, Seinfeld, shows like that. So I’m less into maudlin comedy dramas that aren’t that funny.”


Series 4 of Plebs is available to own on DVD on the 4th June.


We have a copy of the series 1-4 boxset to be won in our competition, which you can enter here.