Norway hasn't really got a great track record for breaking into the international mainstream circuit of cinema. In fact they have a better record in the Eurovision Song Contest, having won it three times; they also have the worst record for coming last the most  ten times  but let's not dwell on that.

Troll Hunter however, wants to change all that and put Norway firmly on the cinematic map, as well as avoid getting nil points.

If you go into the Norwegian woods today, you're sure of a big surprise: bears have been sighted, but sadly no signs of a picnic. This news has made a small group of students rather excited, as they grab their camera and go off to chase the story.

They attempt to catch up with supposed bear poacher Hans (Otto Jespersen), but he's one slippery character. Not one to let a great story pass them by, the trio follow him into the woods in the dead of night. Suddenly, out of the stillness, they are greeted by a thunderous noise, the likes of which no bear could ever make. Running towards them is Hans yelling "Troll!" at the top of his voice.

It transpires that Hans isn't a bear poacher at all, but in fact works secretly for the government as a troll hunter. Although sceptical, they are all very intrigued, so Hans allows them to join him the following night, where he will reveal to them some genuine trolls.

Clearly they're excited about getting such an incredible scoop, but as the days and nights go on, they get far more than they could ever bargain for. 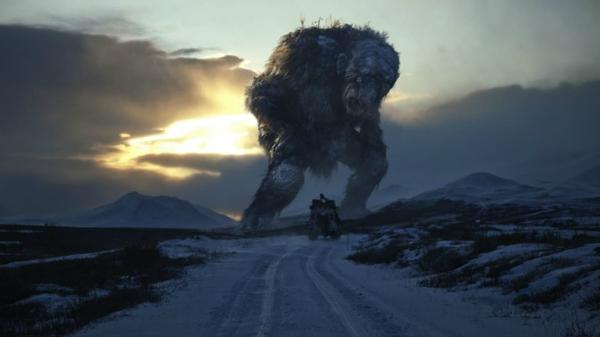 When they said to beware of roadkill in the brochure, I wonder now if they meant us?!

For only his second film, writer and director André Øvredal has created a film with a lot going for it. Unfortunately it borrows heavily from far too many films to be considered anything near original.

The main sticking point is the shooting style. If it had been out before 1999 and the release of The Blair Witch Project, it would have been considered ground-breaking. Sadly though, way too many mockumentary style horrors have been and gone since then. The premise that all the footage in the film was discovered untouched, and the events that unfold are exactly as the students shot it, has just been done too many times before. This instantly makes this film feel like an overly familiar copycat.

Perhaps the director was overwhelmed with both writing and directing duties, as the script is lacking in almost every sense. What it really lacks overall however, is personality. Even the trolls look a bit miffed to be on screen.

On top of this, Øvredal has certainly cast an enthusiastic bunch, but sadly their acting skills are borderline non-existent. Thankfully he has Jespersen on hand, to help out with some much-needed gravitas. His troll hunter is full of the necessary wisdom and maturity you would expect of someone who hunts trolls.

The real stars however are the trolls themselves. They are certainly more impressive than you would ever expect, especially when you consider that they weren't made in Hollywood. They look pretty imposing too, certainly enough to ever put you off of camping in the Norwegian country side.

If Øvredal had opted a more traditional style of filming, Troll Hunter could have made more of an impact than it does. With a US remake confirmed, it will be interesting to see which road they take with it.

The film may well put Norway on the map, but it doesn't quite make it a 'Wish You Were Here' destination.