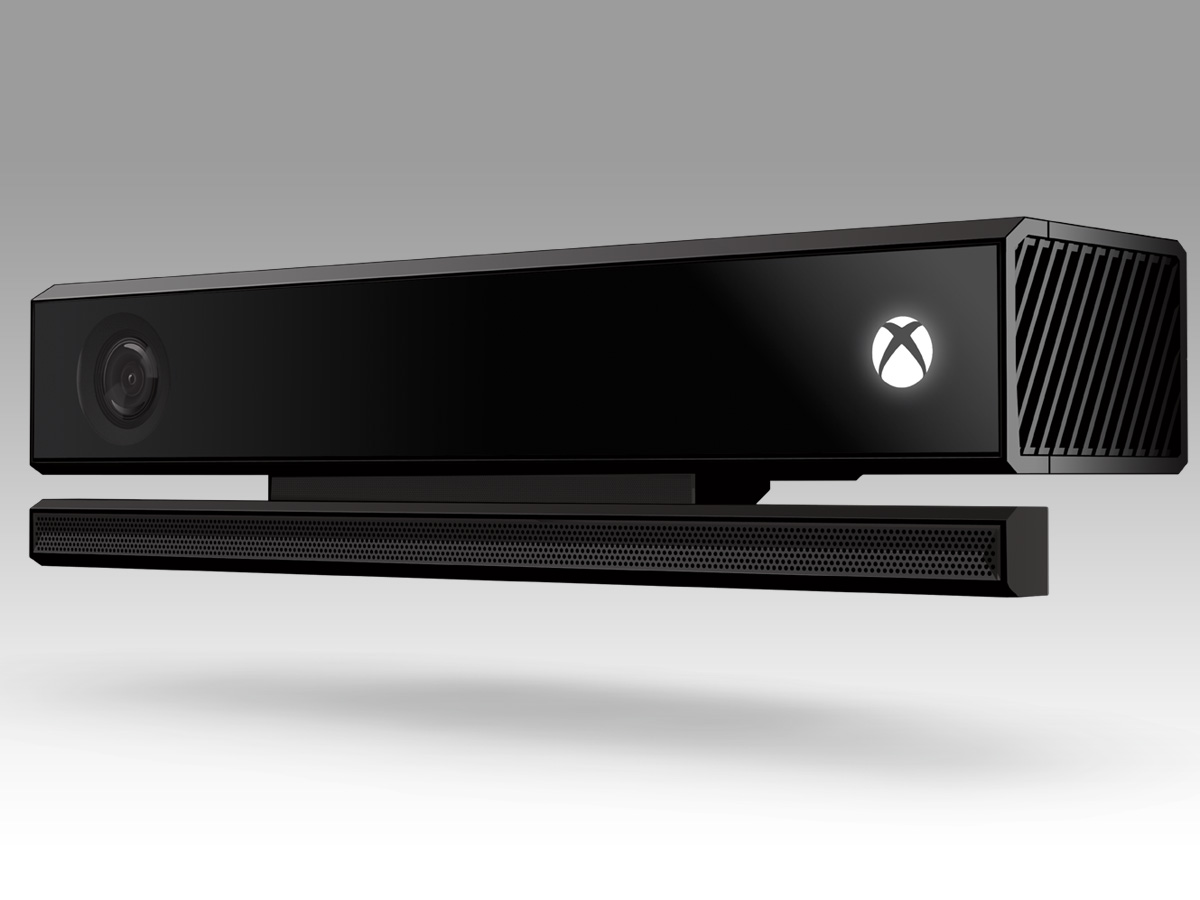 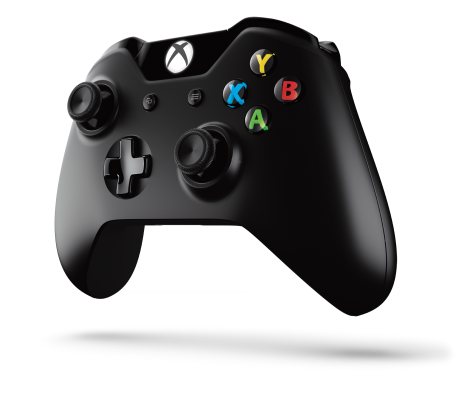 After all the hoo-hah and anticipation surrounding the next generation of console gaming, it's finally here. First out of the blocks was the Xbox One, Microsoft's successor to their successful 360.

Out of the box the first thing that hits you is, well, it's a big black box. And despite having half a matt side on the top and the other gloss, it's visually underwhelming. Its front facade doesn't give much away either. To the right is a logo that glows white when the system is on, and to the left there's a slot in which to pop your discs. Which means there are no other inputs on the front, not even a port to charge controllers. This is simply an inexplicable omission.

When we play with our 360, we have both a wired and wireless controller. For no other reason than having to faff around with batteries, the wired option is always our go-to controller. As yet, the only controller for the Xbox One is the wireless version. This means that you've got to either have a bunch of rechargeable batteries on the go, or use something like the official charge and play kit. This last option however means that you will need to have a cable running from the side of the unit where there's one solitary USB slot, you know, to charge and play. So clearly they didn't want anything to interfere with the clean, dull lines of the front facia, but were more than happy to have cables and things poking out of its side. It's great having a clean design, but it's really annoying when it's at the obvious expense of practicality. 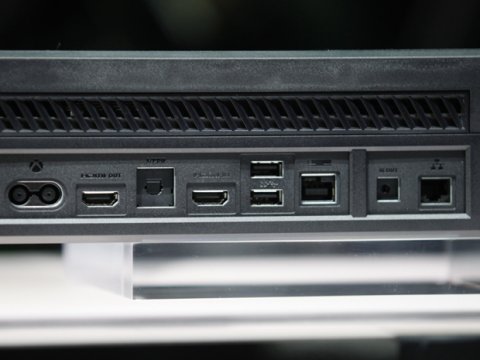 So where's the connectivity? Round the back, you say? Oh. That's, er, useful.

Unlike the 360, you can't buy an Xbox One without the new Kinect camera which comes bundled with every unit. After a few demos with the original Kinect, we decided to stay well clear of all its arm-waving nonsense. Without a killer app release for the device, it was possible to completely ignore the relatively dull titles released for it. It's no wonder that a compulsory purchase of the unit has been a real niggle with gamers.

Still, not one to dismiss something straight from the off, we downloaded the Kinect Sports Rivals demo. Soon after waving our arms around randomly for ten minutes, it was quickly deleted. The camera and software may well be a vast improvement on the old system, and yet the controls of the jet ski were as wet as the surroundings. It may be just buggy, but it doesn't showcase Kinect in the best light.

It doesn't help that the camera is a huge beast itself, requiring a fairly prominent position in your home entertainment set-up for it to work. Not only that, it looks evil too. Imagine the head of a robot that is constantly scheming to destroy all of civilisation. That's the Kinect camera, that is. And as its default position is on constantly, it's all quite unnerving. For peace of mind, it can be deactivated in settings. The really troubling thing about this however, is that it isn't even missed.

When you turn the box on, you're greeted with a green background with a floating Xbox One logo in the middle of the screen. Soon after, you're introduced to the home page. Anyone familiar with Microsoft's new-found love for tiles within Windows 8 will find the layout eerily similar. And of course that's not by coincidence.

One of the first tiles that caught our eye was the one for Skype. Using the new 'fab' Kinect camera, chatting to friends and family on our big telly was almost appealing. After a short download, we were ready. Or so we thought. As the Microsoft account we set up for our 360, and now Xbox One, was created purely to register for Xbox Live, we had no contacts listed for Skype. So we followed the options to unlink this one and link it to another one that we normally use for Skype and so have one or two contacts listed on. After a few dead ends, we ended up with a real human being, on our console. Although we appreciated having a real advisor, the controller isn't the best device for typing on. Still the advisor was patient enough. Sadly, it transpired that if we did want to link to another existing Microsoft account, we would lose everything associated with the current one. Does that mean that Xbox Live would be deactivated? Yes. We were having the worst honeymoon period of owning any new console. 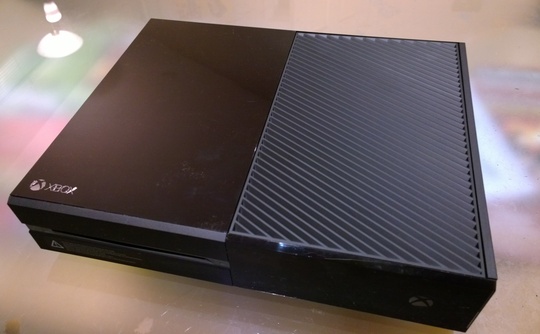 One side smooth and silky, the other has a built in cheese grater. What more do you need?

We then decided to stick in a Blu-ray, which was a bit of a first for a Microsoft console. Considering how adamant they were regarding Blu-ray when the 360 was introduced, it seemed odd playing one on this new machine. Again, although not pre-installed, after a short download we were up and running. A nice bonus was that as the console has an optical input round the back, you can hook up an older AV receiver for a digital surround sound experience, as well as through the now standard HDMI.

No surprise that with the tile format, you can add apps to your home page. We added 4OD and found it a pleasant experience. We're not sure how many apps we would download though (with the likes of Netflix, LoveFilm and YouTube all readily available) due to the limitations of the hard drive which, unlike the PS4, isn't upgradable. This wouldn't necessarily be an issue if it wasn't for the fact that all games must be saved to the hard drive in order to play them. We checked and found that having one game (Call of Duty: Ghosts) and one demo (Kinect Sports Rivals) already took up 12.1% of our hard drive space. This could prove to be more problematic further down the line.

With the Kinect camera attached, you can use both voice and gestures to move around your home screen. However it's far quicker to use the controller, making these gimmicks redundant. It doesn't help that you need to watch a video tutorial to get the most out of it. Having watched it a couple of times, we tend to forget what needs to be said to make it do what we want it to. Ironically this isn't a problem with our PS4 when its camera is attached (bought separately), as it gives prompts at the bottom of the screen as to what voice commands do what. With these prompts, we often find ourselves chatting to our PS4, opening and closing games and powering off.

Microsoft have been keen to push the system as a multi-media system, but it certainly doesn't impress on that front. It currently doesn't even play back video from a USB key, which you can easily do with a PS3. Although to be fair, you can't do this yet on the PS4 either. You can also apparently run your TV signal through it, with the ability to watch TV and play games simultaneously. We can't think of a more pointless idea. If you want to watch TV on your TV, it's pretty easy to do. Likewise play on your console on your TV. If you really need to feel the need to do both, then you clearly have too much time on your hands.

Thankfully there's better news where the controller is concerned. For our money, the 360 controller was the best of the last generation. The improvements they've made with the Xbox One controller have made the experience even better. The thumbsticks are really intuitive and the gripped out edges make it even easier to move around. The only negative is the choice of colours and the childlike scribbling of the letters on the face buttons, which really look like the work of a kid in nursery.

As far as the games are concerned, it's a little too early to tell. Due to some mis-communications with the PR company, we weren't sent the first party launch titles. Now that they've been out a couple of months, it looks like we didn't really miss out on anything, certainly no game changers.

The most often played title in the console is Call of Duty: Ghosts. Visually it looks that little more impressive than the last generation iterations, but it's really early days yet as to what the machine is truly capable of.

We can't say that as an out of the box experience, we aren't more than a little disappointed with the Xbox One. With the Kinect included it's by no means cheap, and it just doesn't feel next gen enough to differentiate it from the PS3 and 360. Yet. Hopefully this will change, but currently, until the old gen has completely died, the transition to this next gen machine isn't as necessary as we would have hoped.