The Legend of Zelda: Link’s Awakening

There must be a certain amount of pressure that comes from having a hugely successful franchise on your hands, in the sense of trying to keep it fresh and engaging with every instalment. Not so for Nintendo, so it seems; the Zelda series has grown into a serious concern, and yet they still manage to outdo themselves from their last jaw-dropping achievement.

With this latest outing, much like their eternally young hero, they have gone back to the past, remaking their Game boy classic The Legend of Zelda: Link’s Awakening from 1993, which itself got a make-over with a DX version, appearing as it did on the Game Boy Colour in 1998, this time in glorious technicolour! 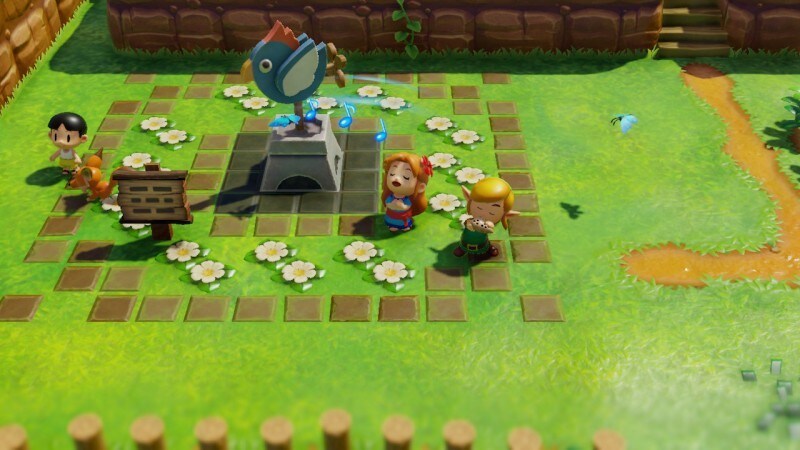 hey guys? Are you sure you haven't put me in the latest Animal Crossing by mistake?!

After getting into some difficulties at sea on his boat during a severe storm, young Link awakes on a beach in a strange land. He is greeted by a friendly local, Marin, who tells him that he’s on Koholint Island.

Not long after taking a look around and chatting to some of the locals, a large bird informs him of a quest he must embark on, if he is to ever leave the island. He must search out the eight instruments that are hidden around the island, only then can he awaken the legendary wind fish who has the power to help Link leave these shores behind. 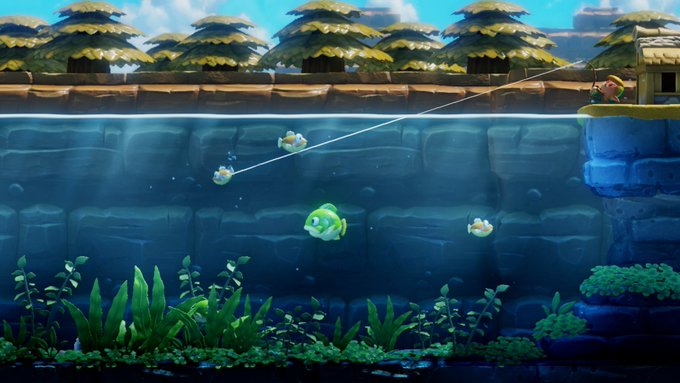 He's got it written into his contract apparently, must always have a mini-fishing game.

With the huge success of Breath of the Wild, there must have been some degree of temptation with whatever was to follow it, to replicate its winning formula, and at the very least follow its 3D template. But Nintendo doesn’t always follow that line of thinking. Instead, they chose to keep this adventure, like the original, in 2D. There’s no doubt that this route is also the easiest by far from a production stand point, but it also allows the developers to pay homage to the franchise’s humble beginnings.

Just to keep it interesting, the game does revert to a front on 2D style, like some light, traditional platforming in the dungeon sections and various mini-games.

The 2D world though is certainly stunning. It is rich with colour and texture as the über cute Link character explores his surroundings from the top down perspective. The overall feel of the look of the game has a Toy Story quality about it. Link and all the other characters look like they could have all popped out of those vending machines (as featured in the classic Shenmue), where a toy would emerge from a plastic capsule.

The world they inhabit has a similar quality, as if made with less pointy LEGO, with lots of shiny surfaces, but also robust enough to withstand a four-year-old traipsing all over it.

But do not make the mistake of thinking this cutesy cutesy world is going to be a push-over, as it doesn’t make the overall game-play any less challenging. However if you are finding it a breeze, by all means go up a gear with the harder mode available and knock yourself out with that.

Just as with the original, and with every subsequent game in the series since, this adventure is all about exploring. Sure you can go off on your own, running around the island at your leisure, where you can even take in a spot of fishing, win a toy at a grabber, or anything else that tickles that fancy of yours.

What the game does though, rather cleverly, is drip feed what you can and can’t do, as well as where you can and can’t go. There are specific items that need to be found, like a ring of strength for example, that gives you the power to lift heavy objects, and thereby explore a new area. And of course, these necessary items can usually only be found in dungeons.

It’s here that the game turns the difficulty level up a notch. With save points within them as rare as can be, you often have to tread carefully, literally in some places, with a number of crumbly floors. If you lose all your hearts, it’s game over, and you’ll be sent back to the start of the dungeon. You certainly have to work harder here, but the rewards are greater, so there’s a sense of achievement when you finally get one under your belt.

The original may well have been played to death, most likely yours over and over in the game, but to play it now would only be for retro appeal, which let's face it, has a limited attraction. This version is the brightest, most joyous of make-overs, keeping the thoroughness of the game-play of the original intact, whilst making it far more accessible on the Switch.

It is the most charming of remakes, brimming with little touches, that still manages to be true to its traditional roots. In short, it’s classic Zelda.

It also shows how older titles can be re-imagined for newer audiences, opening the door to endless possibilities.

The Legend of Zelda: Link’s Awakening may well be a clever bit of thinking, putting lots of modern slap on an old school classic, but at its heart, or many hearts in the case of this game, it’s the simple tale of having an incredible adventure, and whose not game for that?